I wrote a rails app over the weekend with two friends, as a part of Rails Rumble. I had thought about entering both RR and Node Knockout in the past but this was the first time actually competing. Considering each of us thought we could contribute about 8 hours (but probably did more like 12), it went quite well, and it was a lot of stress-free fun as well.


Deciding on an idea: 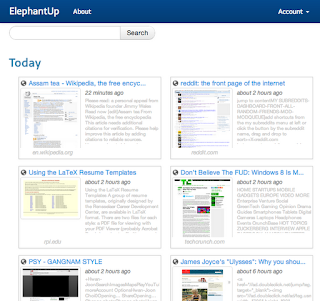 ElephantUp was our second choice project. Our first choice was iPhoto replacement with a DropBox like native/web interface, but we scrapped it when we realized:


Another idea was an exchange board for McDonald's Monopoly game pieces, but turns out McDonald's specifically forbids this type of thing.

ElephantUp was essentially a place to collect bookmarks, where you can search for items. Half way through the design process we realized EverNote does something similar though a browser extension, AND their logo is an elephant. Please don't sue us, EverNote.

A LOT of this went fairly smoothly actually. None of us really stayed up coding the night away, and a lot of work was done asynchronously with everyone 50 miles from one another.

Not a whole lot went wrong really, but there definitely were a few things I would do differently.

Overall a very positive experience, and can't wait til Node.js Knockout in November!
Posted by @hc5duke at 11:46 PM